57 The Desert Heart – An Original Story 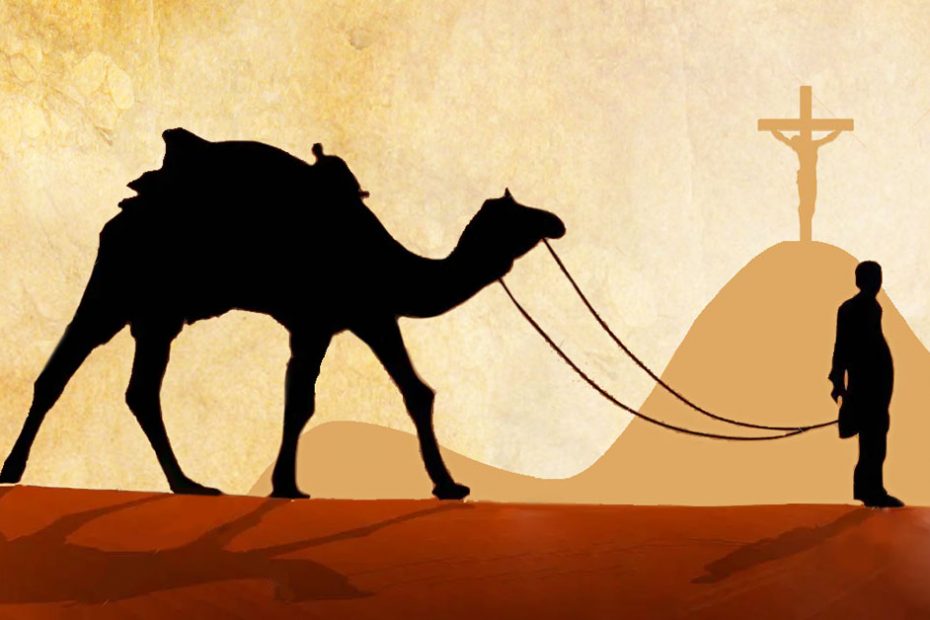 This is a short story I wrote, very much inspired by the experience of discovering God in the wilderness. Join Pirum the orphan as he sets out to find the treasures of the desert, treasures he hopes will make him wise.

Once upon a time, there was a great desert filled with many hidden treasures. At the desert’s edge stood an ancient kingdom, where tales were often told of how the desert’s treasures made their finders wise. Hearing such tales, one young orphan became filled with a great longing. “When I grow up, I will venture out of this kingdom,” Pirum said to himself. “I will find all the treasure in the desert. Maybe if I become wise, the people of this kingdom will notice me.”
For no one ever paid attention to the lonely orphan.

One starlit night, Pirum came across a wise man tending a garden. Pirum could tell the man was fairly wise because his beard was fairly long, and the longer the beard, the wiser you were! “Excuse me, fairly wise man,” Pirum said politely. “Could you please tell me where I might find treasure in the desert?”
The fairly wise man leaned thoughtfully on his shovel and smiled at Pirum.
“Once you possess nothing, you will find the treasure. But, the greatest treasure will be found once you reach the desert heart…

Pirum didn’t understand the fairly wise man’s response, but since the man was stroking his beard, Pirum knew he must be saying something wise.

“Why, if I find the greatest treasure in the desert heart,” Pirum whispered to himself. “Maybe my beard will grow even longer than his. Perhaps even the king will notice me then!”

Few commoners had ever seen their king before, because they believed he didn’t like the sun. As Pirum left the garden, he looked longingly across the oasis lake towards the king’s palace.

A few years later, when Pirum was a young man, he sold everything he had and bought a strong camel. One morning at the break of sunrise, he set off into the desert in search for treasure. He ventured many scorching days, hoping to find the desert heart. All the while, a strong desert breeze swirled the smell of death about him. By the tenth day, his camel grew so tired that Pirum knew he simply had to turn back. The only thing he had found was a shiny fragment of a clay tablet, shimmering in the sand. When he returned with it to the kingdom however, the people became excited.

“That fragment of a clay tablet belonged to a wise man once! He went all the way up a mountain to receive laws from heaven, laws inscribed upon tablets! Ah! Surely this treasure will make you wise too!”

And so, they immediately made Pirum a kingdom counselor. Pirum’s wisdom grew—and so did his beard. But deep inside, Pirum yearned for the greatest treasure in the desert heart, because he wanted to be wiser still.

A month later, Pirum sold everything he had and bought an even stronger camel. He then set out to find the desert heart. This time, Pirum travelled twenty scorching days before his camel began to tire and he had to turn around. He returned carrying the only thing he found: a fragment of fiery red cloak. The people became excited about that as well!

“Ah! That fragment of cloak belonged to a wise man once! This man received power to overcome the enemies of his kingdom … casting fire from heaven! Surely this treasure will give you power over our enemies!”

And so they made Pirum a military general. And through the experience of many battles, their respect for Pirum grew, and his beard grew longer. But deep inside, Pirum still yearned for the greatest treasure in the desert heart, because he wanted to be wiser still.

So Pirum sold everything he had and set out a third time on an even bigger camel. But despite travelling thirty hot and windy days, the only thing he found was an old locust buzzing in the sand. When he returned to his kingdom however, the people were even more animated.

“Locusts were the food of another wise man! He was a great prophet, one who prepared the way for the wisest teacher of all! Surely, this treasure will make you into a great prophet too!”

And so they made Pirum a great prophet. And though Pirum became well loved and his beard grew longer, he was still not satisfied.

Impatient and restless, a long bearded Pirum lay awake one starry night wondering how he could ever find the desert heart. Suddenly, a plan formed. “Three times I have spent everything I had on camels, and not gotten far enough. But I must set out one last time, but this time, I will steal the king’s camel for my journey. Surely a royal camel is stronger than anything I can buy with gold. Yes, I will steal it tonight and depart before anyone wakes. The king will surely forgive my deed once I come back with the greatest treasure from the desert heart.”

That very night, Pirum snuck into the palace stables. He unbound the royal camel and was halfway out, when he tripped on his own beard and stumbled into the oasis lake. The splash alerted a patrolling guard.

“Who goes there?” boomed the guard. “A thief? Stealing a royal camel? Treason! I thought you’d be wiser than that!” He marched a muddy and dripping Pirum into a stony dungeon.

“At dawn, you will stand before the king!” barked the guard. “Surely you will be sentenced to death for such tyranny!”

“Wait! I can explain! I am the kingdom prophet … I command you set me free!” cried Pirum.

The guard eyed the filthy, shivering Pirum up and down and laughed.

“Prophet? Dressed like a pauper? Who could believe that?”

He then slammed the door shut and walked away.

Pirum was totally alone now, and all became deathly silent. “Surely my life is over now,” he lamented, hugging himself. “I had so wanted to meet the king … but not like this. I never got to fulfil my dream. I never found the treasure in the desert heart.”

Pirum began to weep. He didn’t notice the fairly wise man had entered his cell, and had now sat down beside him. After a few moments, the man spoke.

“What troubles you, Pirum?”

“Oh! Please … you have to help me! I have become most unwise.”

“Have not the treasures of the desert made you wise?”

“Not wise enough. Though … though I was the kingdom counselor, I could not prevent myself from stealing. Though I was the military general I could not command even one guard to free me. I am now the prophet, but could not foresee my own folly. If only … if only I had also found the treasure at the desert heart I might have been wiser.”

The fairly wise man closed his eyes. “I remember a time when a boy asked me ‘Fairly wise man, where will I find the treasure in the desert?’”

Pirum nodded. “You replied: once I possess nothing, I will find the treasure. But the greatest treasure is found once I reach the desert heart!” The fairly wise man nodded, stroking his beard.

“But why?” Pirum exclaimed. “Why could I never reach the desert heart? Three times I sold everything I had, and three times I had truly nothing left!”

Pirum looked sadly around the dungeon, then closed his eyes.

“Then truly I possess nothing now. I possess no more choices. I have no more things, no more titles. Tomorrow, my very life may be taken from me. My heart is a desert now. And I haven’t chosen to be here at all.”

The fairly wise man smiled warmly. “Then … you have finally arrived at the desert heart.”

Pirum realised the fairly wise man was right. His heart was a desert now. How strange it seemed that in his life’s darkest moment, locked up in a stony dungeon, he had finally arrived at the place he’d been seeking?

“But fairly wise man, if I’ve arrived at the desert heart, what treasure have I found?”

Pirum opened his eyes, but the fairly wise man had disappeared.

Just then, the first light of dawn streamed through the window, and Pirum knew it was time to stand before the king. A soothing desert breeze blew into his cell, carrying the scent of a garden. And though Pirum knew what fate likely awaited him, he became strangely at peace, for he could die knowing he had at least found the desert heart. The guard arrived, bound his hands and led him outside before the throne. The people from all over the kingdom had gathered to jeer at their unwise counselor, general and prophet. The fairly wise man was nowhere to be seen.

Then a great hush descended on the people. For an old hooded man, robed in gold that glittered in the morning sun, was slowly walking up to the throne. A heavenly light seemed to illuminate from him, and all present felt compelled to kneel in adoration. The king had arrived. Not daring to raise his eyes, a humbled Pirum spoke first.

“Great king, I accept my own folly. I know I have been unwise. I tried so hard to prove my wisdom with great treasures. But I have learned nothing, and I have gained nothing. I am nothing. My heart is a desert.”

The king removed his hood, revealing an old man with a long beard. It was the fairly wise man. The fairly wise man was the king! Pirum had been speaking with the king all his life, and he never knew it! The king gazed upon the kneeling Pirum warmly and gently on the shoulder.

The king then looked out at the people gathered.

“This boy confesses a desert heart. And he deserves the greatest treasure of one who has arrived there.”

He turned back to Pirum, smiling. “I now give you, the gift of mercy.”

And with that, he loosened the bonds on Pirum’s hands.